Digital pollution, how to choose the right partners ?

Digitalization has been one of the most influential processes of the 21st century. In a relatively short period of time, technology has permeated virtually every aspect of our personal and professional lives. Although there’s no denying that the digital world offers many conveniences, it also comes with drawbacks that must be considered.

Digital pollution is one of the consequences of an increasingly tech-reliant society. As it happens with other forms of pollution, minimizing its impact is a collective responsibility in which businesses have an important role to play.

In this article, we’ll consider the importance of choosing the right providers in your strategy to limit digital pollution.

Digital pollution is caused by three main factors. First, we have to run digital communications, such as data centers, cables, and antennas.

The energy input needed to extract raw materials and  build digital infrastructure and devices is another source of pollution, especially in corporate environments. According to a Forbes survey, the average worker uses more than 3 devices.

Lastly, even the most basic digital activities have a carbon footprint. For example,  a couple of online searches  per day generates nearly 10 tonnes of CO2 per year ; and the annual carbon footprint of 20 daily emails is similar to a 620-mile drive.

Why digital pollution matters in the business world

When digital infrastructure and online activities are taken together, they account for approximately 4% of all greenhouse emissions. The magnitude of digital pollution highlights the responsibility that businesses have in becoming more aware of consumption and its environmental impact. In an increasingly eco-conscious world, developing this awareness is a real strategic choice.

By taking meaningful action, business leaders can set a powerful example, inspire others to do the same, and build a reputation that sets them apart from competitors.

What businesses can do to minimize Internet pollution

Bringing digital sobriety into corporate culture is one of the most effective ways of reducing the impact of online activities. To achieve this, you can rethink tech use in your company and implement a variety of strategies, such as:

– Encouraging employees to adopt good inbox management practices. This is important to avoid making excessive use of cloud resources, which are estimated to have a bigger impact than the airline industry.

– Keeping emails “light” (no unnecessary cc, being mindful of attachment size, and using plain text instead of HTML emails).

Choosing the right partners for an even bigger impact

In addition, it’s also useful to create a network of partners who share your commitment to digital sobriety. To do this, you can :

– Choose suppliers who already implement the measures described in the previous section.

– Analyze your supply chain and prioritize companies that share your values (for example, choosing providers of refurbished devices instead of buying new by default).

– Choose a business intelligence software tool that consolidates all your data while keeping its environmental impact to a minimum. 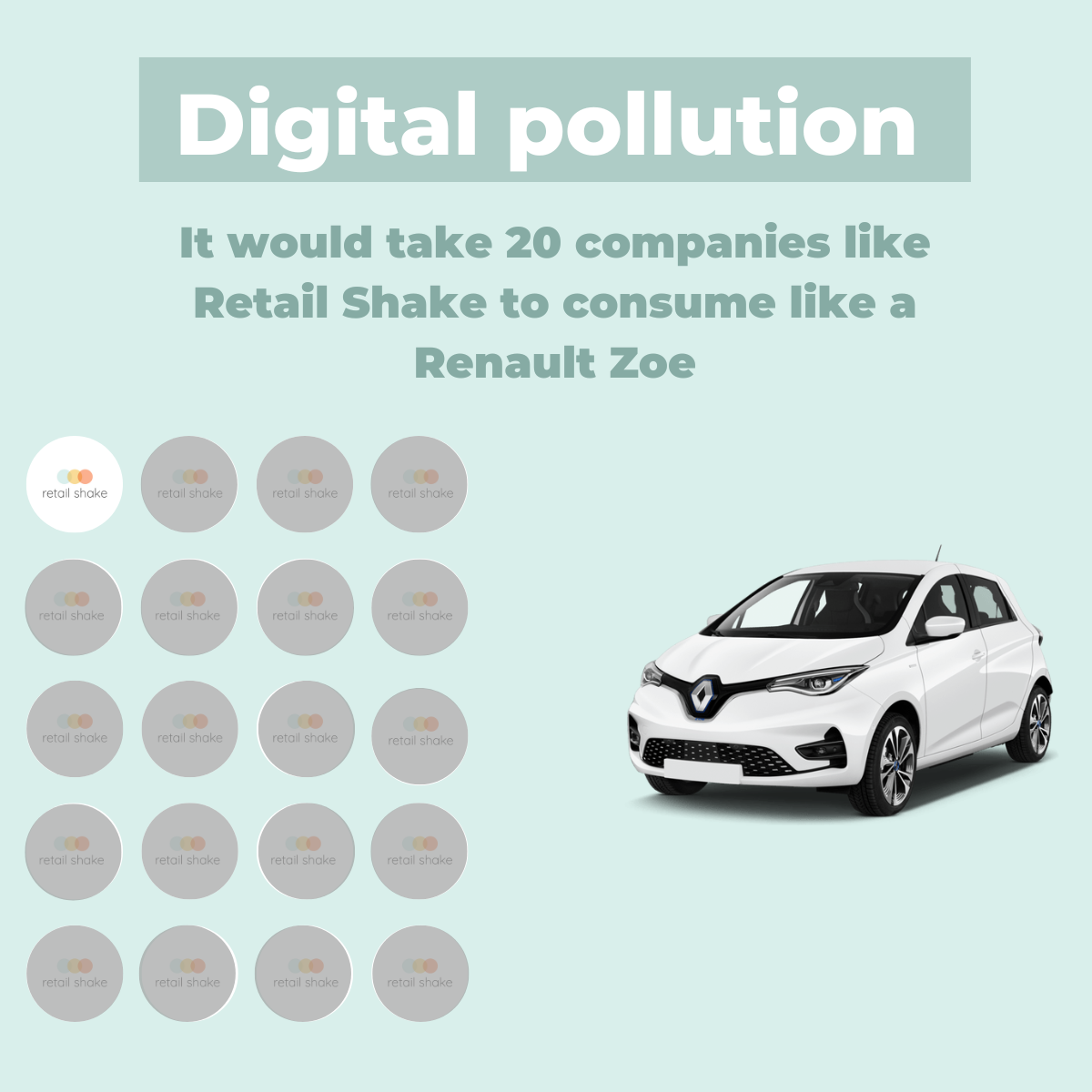 Strategically choosing your partnerships can elevate the impact of corporate actions created to minimize digital pollution. When you do this consistently to the point that it becomes an integral part of your corporate ethos, you’re helping create powerful networks whose high impact will be felt now and in the future.

We encourage you to contact RetailShake to discover how our business intelligence solutions can facilitate your journey towards more sustainable practices.

I want to know more

This website uses cookies to improve your experience while you navigate through the website. Out of these, the cookies that are categorized as necessary are stored on your browser as they are essential for the working of basic functionalities of the website. We also use third-party cookies that help us analyze and understand how you use this website. These cookies will be stored in your browser only with your consent. You also have the option to opt-out of these cookies. But opting out of some of these cookies may affect your browsing experience.
SAVE & ACCEPT